I guess everyone reading this blog knows my dad's been fighting cancer.  He passed away last week.  He was home on hospice for about three weeks.  (The doctors predicted he'd live only one week after leaving the hospital, so we were pleasantly surprised.)  I was really glad for the chance to say goodbye.

In case any one's curious, here's a picture of me and my dad. 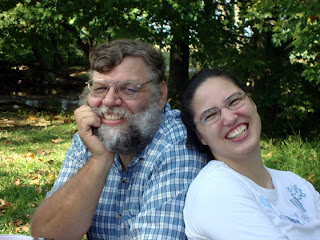 I also thought I'd post what I wrote to say at the funeral.  It's not what I actually said.  I changed stuff all around and ended up just holding the paper as a security blanket and not looking at it at all, but here's what the speech would have been if I'd read it:

There are lots of things to remember about my dad. He liked fishing, and he was always teasing and joking around the supper table. I remember once when I was maybe three or four he got me all riled up over a loose tooth. He said he'd be walking me up the isle on my wedding day and all of a sudden have to shout `It's out!'

My dad taught me about honor. Not that he talked about honor or anything -it's kind of an old fashioned word- but he lived honorably, which is much better. One thing that made a huge impression on me was when we got into debt when I was about sixteen, and dad and mom paid the thing off. Everyone he talked to told him he was crazy -that he should just declare bankruptcy and forget it, but dad believed a Christian should pay his debts so he and mom pulled together and got them paid off. The Bible says in Psalm 15 (and I'm paraphrasing) that a righteous man is one who swears to his own hurt and keeps his vow. My dad didn't talk a lot about his faith, but I think anyone who knew him knew he always did his best to follow Christ.  I'm not saying he never grumbled or that he didn't feel like Charlie Brown sometimes -I know he did. But those feelings didn't change the way he lived.

Toward the end he was really looking forward to Heaven, especially the river and all the great singing. We did our best to give him a proper going home party.