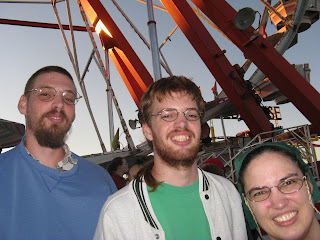 My brothers and I under the Ferris Wheel.  (I'm the one in the lower right corner.)

Last night at the Great Frederick Fair I had my picture drawn by a caricature artist.  It was a lot of fun -especially seeing my friends snicker as they watched me being drawn.  The artist gave me scrunchy eyes and a huge grinning mouth; in fact the mouth is practically my whole face.  My eyes really do squint almost shut when I grin, which is often.  Being happy can make it hard to see.

The job of a caricature artist is to notice details and exaggerate them.  Exaggeration is one of the building blocks of comedy, after all.  It's funny because the truth is there, distorted as the reflections in the hall of mirrors.  There's a sense of strangeness, followed by recognition.  You go `what in the...? Oh!  Of course!' and then you just have to laugh.

Some people complain that Dickens characters are actually caricatures; that because he comically exaggerates the details he looses all resemblance to life.  They sort of miss the point.  Dickens had no idea that he was writing classic literature.  He was entertaining people while giving them a sideways look at Victorian society that magnified the flaws so they could be addressed.  An accurate portrayal would've just said `this is the way life is' instead of `this is crazy!'

I think writing accurate pictures of people is a lot harder than comical exaggerations.  I'm sure there are those who find it much easier.  (Lucky them.)  Just like in art, both styles take an immense amount of talent, and a well trained eye.  The important thing is to remember that both are a legitimate stylistic choice, and both have an important place both in our history and in our current arts.
Posted by Chicory at 9:31 AM